Back in September of last year I played my first game of FUBAR using my 28mm Irish War of Independence forces. FUBAR was originally written and is mainly intended for Sci-Fi but it's very extendible.  The figure/model scale is 1:1 but it's not really a skirmish game as some would understand it. It's really a squad level game comparable to Force On Force or even Crossfire.

The rules certainly worked and my gaming companion was positive about them, but they have a very distinctive feature which perplexed some of the onlookers. Subject to troop quality, players can choose whether to take casualties as suppressions or kills. This seems to represent a trade off between allowing yourself to get pinned down or pressing forward at the expense of taking losses. It makes sense to me. However, kills or suppressions are things that are usually imposed, and it's novel, even disconcerting, to put this choice so literally into the hands of the victim. 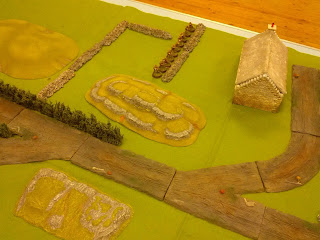 Hills are the excellent light-weight hollow resin ones from Tiger Terrain. TT are not currently making them but I'm pleased to report that they are back in business and can be contacted at tigerterrain@gmail.com. 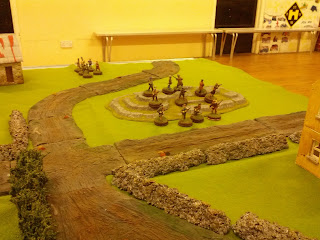 IRA forces: shotgun detachment (in distance) moves to occupy the barn. IRA riflemen (near) come down from the hill.

Roads are JRM. Hedges are K&M. Stone walls are home-made from PVA and cat litter. 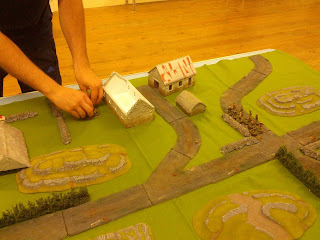 The British Army rifle section moves up to occupy the farmhouse.

Buildings are scratch-built from foamcore.

I'm pleased to report that onlookers recognised the rural Irish scene before any appearance of figures! 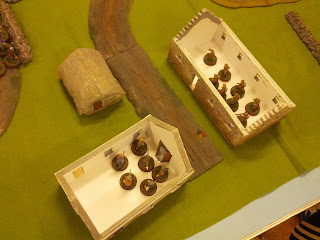 IRA shotgun detachment (left) in fire-fight with British Army section (right). The Crown Forces get the better of this.

I now intend to darken the white building interiors. 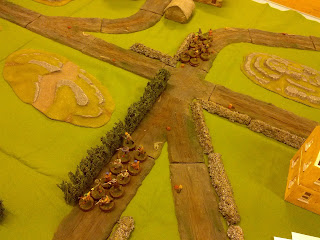 Two IRA rifle sections in final position before withdrawing. Withdrawing was actually a very bad move!
Posted by doctorphalanx at 09:29:00